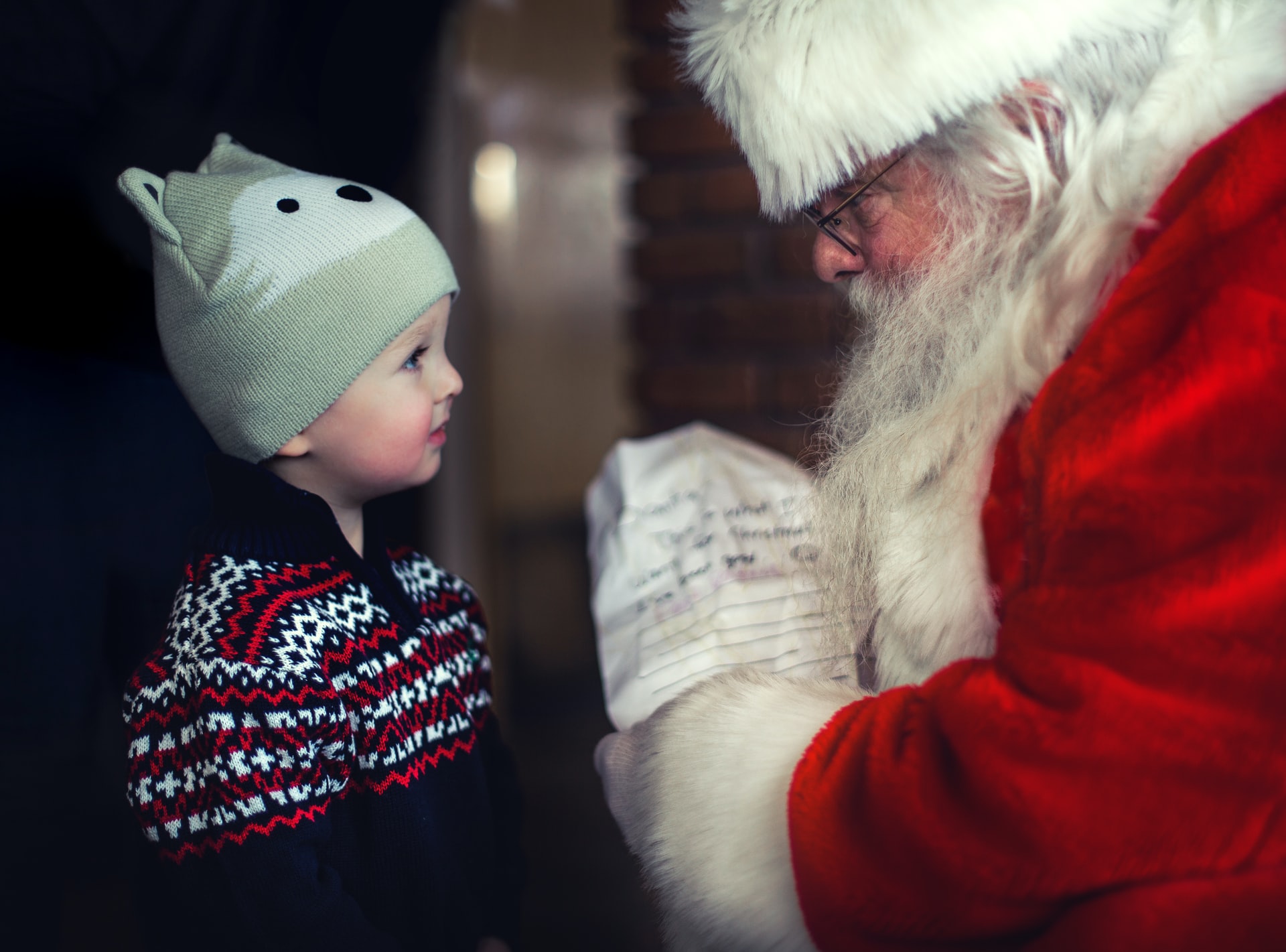 The modern conception of Santa Claus was created by Clement Clarke Moore as an alternative to the original Christmas theme, blending a Dutch burgher with a Turkish bishop saint.

Today he’s known as a rotund, red-faced gentleman with the white beard and twinkling eyes, who drops down your chimney and leaves gifts – or coal – for little boys and girls.

Yes, brands like Macy’s and Coca Cola have commercialized him into blandness.  But the irony of this modern myth is that he has transcended everything, and become a greater and purer symbol.

Our Modern Age of Faith

Today, when the High Priests of Science speak to us of quarks and magnetism, demanding our blind faith in the lack of meaning to the universe, we have tossed out the Christ Child with the bathwater.

The spaces between the stars and our atoms are no longer laughing with angels, but empty and black. Reality is presented as a cold, calculating clock juddering with random events, and spurting pointless entities called ‘life’ into a death machine.

We are living in the dark bones of a freezing winter, where the White Witch is in control.

But if there’s one thing we know about Santa Claus, you can’t keep him out. G. K. Chesterton muses on Santa’s eternal return in his short story, ‘The Shop of Ghosts’. There Charles Dickens and Robin Hood are both surprised to find Santa still giving presents in a toyshop in modern London. They leave the shop convinced that Santa will never die.

And there’s a reason why Santa will remain; he is one of the last things worth fighting for today, he is the last shred of humanity and divinity in a frozen Atlantis of religion and philosophy, now largely inhabited by arrogant cavemen.

Why Santa Claus is Really God in 14 Bible Verses

Attributes of the Almighty

Santa may have started as a bumbling version of St Nicholas, the generous saint in Turkey who provided for the needy and desperate during the Medieval Ages. But even after wiping the holy water off his brow and turning him a commercialized cookie-chomper, God only smiled.  They ended up making Santa more like God Himself than God’s messenger.

See, the essential Santa is an affectionate, grandfather-figure who is all-knowing, all-powerful, basically all-present, and has power over time and space. He is the moral arbiter of the world, and rewards the good and punishes the bad. He is meticulous with his justice, and gentle with his mercy – he always checks his list twice.

He is full of good cheer and happy smiles, stealing in like a thief in the night, and leaving presents instead of stealing them. He comes through the chimney, the ‘doorway to heaven, the portal to the gods’ as Chesterton describes in his novel, ‘Manalive’. And he has no qualms about enjoying the good and little things in life; a fresh glass of milk and a chocolate chip cookie(s).

Consider also the other aspects of his legend; he lives in a place not bound by time, a place of perpetual warmth, light and magic inaccessible to mere mortals.  His helpers are numerous, forever young and happy, every instant of their lives in service preparing the gifts he bestows.  What else is this but a child’s tangible vision of God, Heaven and Angels?

How is this God the Father? Because God the Father is far more like Santa Claus than He is like Allah.Allah is master, we are his subjects.  There is no relationship, only his will that drives everything – therefore denying our free will.  He is said to be ‘beyond good or evil’, beyond even love itself.

God the Father not only loves, but is Love itself. The Greek philosophers determined that love had to be the animating force for unity in creation, because love binds together, anything else drives apart, creating chaos. For God didn’t will us into existence; He loved us into existence, even those whom He knew would run from Him.

The Soul of Children

Children today have nothing to hold on to, nothing to look forward to.

They are told that they are cogs in a machine, or quivering lumps of dust and jelly destined for nothingness.  Nothing is given to fulfill their deepest, human cravings; to love, be loved and be in a loving environment forever.

Santa is the last glow of humanity in this ‘frozen’, seemingly pointless world. He is more wonderful than our parents, for with all their goodness and vicissitudes, Santa sees everything and understands. For all the power and pervasiveness of Big Brother, Santa is Grandfather who can be anywhere and do anything. His flowing white beard is the mane of Aslan.

But there’s no white-heresy with him. Children know when they have done the wrong thing. And they know Santa knows. That’s why Santa needs to start giving coal again, to make good and evil real, to make happiness and punishment matter again.

If Santa turns a blind eye to the badness of little girls and boys, then what is the point of punishing evil at all? Why do we have prisons and correctional facilities? Why do we have police forces and law systems and penalty systems?

Santa is obviously the transcendent figure, higher, greater and more beautiful than any Supreme Court Justice – and far nimbler with tight spaces. He sets the moral example, rewarding those who run the race (2 Tim 4:7).  A nation of winners is a nation of bad losers.

This is why we need to rally around Santa’s sleigh and take up arms. We are defending the last hope most children all round the world will ever have to experience God the Father, to know kindness and omniscience, to come in contact with the mystical flash of the divine in their very living rooms.

Granted, by the time children are 7, they shouldn’t need Santa any more. He should become one of ‘the ways of the child’ that they have put off for the ways of the adult. The concept of Santa should never be a ‘lie’; Santa is a user-friendly version of God the Father.  As children mature, their understanding of Santa shouldn’t die, but mature into a clearer vision of the truth. God provides the gifts, as always. Kids rarely ‘get’ God, but they do ‘get’ Santa.

Santa is greater than a saint.  He is not a fabrication of silly minds, or only a commercialized excuse to replace the Christ-child. Santa transcends the Christ child, by absorbing Him. He is a symbol; purer, greater and simpler. He is the last hope for a pagan world, for children everywhere. He is happy, holy and hearty, and he’s coming to town.