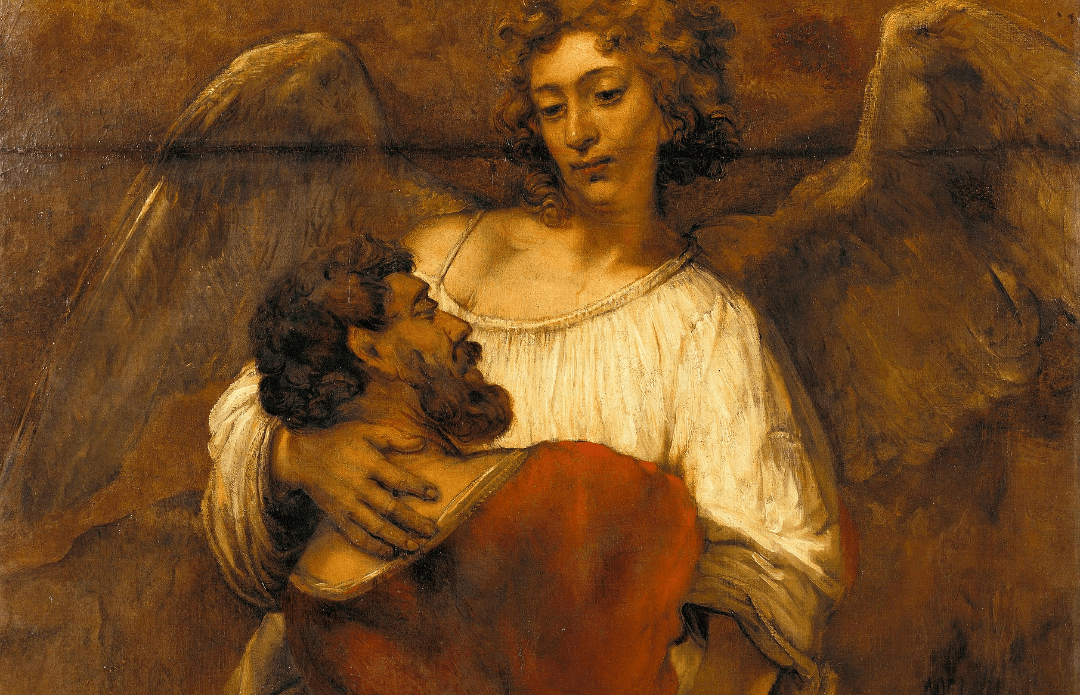 Fighting the ‘call to holiness’

Sometimes I think that if you’re not in battle with God, you might not be moving at all.

The meaning of ‘Israel’ is the God-Wrestler, someone who ‘contends with God’. I think we all need to go through that challenge, if only that we can be broken by it.

We work very hard as we grow up to build up who we are. And then we come in contact with the world. Half the time, it shatters us, in a good way. We weren’t actually ready for it.

So we remake ourselves, learn the lessons, get stronger, faster, wiser.

And then we come in contact with God. And we’re often shattered again.

Then we get wiser, richer, holier.

But that second shattering, that wrestling to see God and find God, is a frightening thing.

I think we’ll all either do it before we die, or after we die. But we all need to come to that moment where we’re ‘running the race’, putting all the effort of our being into begging a blessing, struggling with the unanswerable realities we can’t answer.

More than hanging on

In a special way, The Council of Vatican II returned to a message that had long been central and sprouting and bursting at the seams of the Gospel. The saints, mystics, and magisterium had been talking about it for a long time. But for some reason, it wasn’t ‘sticking’ with ordinary folk like you and me.

Most of the world assumed that kings and bishops and leaders and nobles were called to be our models of goodness. We ‘hold’ on to their robes to ‘squeak’ into Heaven.

That was how the ancient world worked. But Christ changed all that. He shared a vision of the Kingdom and the Temple and the love of God. And he called for repentance and holiness, and new wine in new wineskins.

The priests who grew up and dreamed with the Council, and have now become our Holy Fathers – Pope St John Paul, Benedict XVI, and Francis, have been insistent on this call to holiness.

It is a call to every single human – become the best version of yourself. Be filled with life. Repent of your sin, overcome your addictions, be aware of your flaws. See the open arms of Jesus and the golden heart of Mary constantly calling every single human being.

But for me, a lot of this was pious homilies. I ‘assented’ to it. But I was addicted to everything else going on in my life.

So one day, I climbed up into a bus in Sydney, and heard some young people discussing the Faith. They were asking some honest questions, and making jokes about what they knew. Right then might have been a perfect chance to turn around and say hi. To engage them.

But I did nothing on that ride. I stayed silent. And I felt like a complete traitor. You see, I was the son of a public speaker and apologist. I also was working for Parousia Media, an exporter of some of the best Catholic media and materials available in the world.

I would be torn with guilt every bus ride because I pulled out a novel and started reading. Shouldn’t I instead turn around and try to chat?

Years later, I now know what was wrong.

I ‘sort of’ loved my Faith. But I loved it because it was a tool that made me look good. It was something I could be good at. It wasn’t yet something I really lived.

My heart had the ‘smoke of Satan’ in it. It’s that self-righteousness where I thought I could hand on the water of life and not actually drink any of it myself.

I was play-acting. The Gospels were a movie I watched in my head and talked about a lot.

It wasn’t yet a message in my heart.

I lived in fear of God. I was terrified of sin. Terrified of myself. And frankly, terrified of being challenged by other people – in case I didn’t have the answers.

These reflections started changing my life.

When I got married, strange things happened where I was called to make a choice. I had to choose between loving a person, or the life I’d been building. I chose a person – my wife to be.

And it broke my life in half. Ten years later, I couldn’t be more grateful. Our marriage is a sacramental seed that sank in deep.

There were no angelic choirs. No great peace. I was the butt end of a lot of loss and misunderstanding. For a long time, all I felt was silence.

And in that silence, something sprouted.

Something starting pushing on me from the inside, like light.

I began to live a new life. With my first child, I began to see with new eyes. And in our little hermit-like home, far from friends and community, I began to retrospect God rewriting my life.

This call to holiness is something I’m still fighting him on.

Like Jacob with an Angel. You don’t walk away intact from a dustup like that. It breaks you. It has to. And it changes you into something greater.

Our daily hope has to echo St Joan of Arc: “I pray I am [in a state of grace], and if not, then I pray God put me there.”

Jacob probably grumbled at his hip. Paul with his side-thorn.

Even Jesus in Gethsemane asked that the cup be taken from him – if it was God’s will. But they all accepted it.

So we grumblers are in good company!

Perhaps in those battles, we then find we weren’t just battling God. God was battling in us.

No, not against anything. What feels like a battle is only our resistance to more and more divine energy, more and more holiness, wanting to exist in us. To pour through us. To be used by us.

Like electricity overheating a dulled circuit. The circuit needs to change and ‘upgrade’ to allow the flow to resume, and keep everything else online.

To allow this process means to die, in some way. Some very real way. Because only then can the seed sprout.

Only when Job ‘dies’ to himself does he begin the baby steps of humility.

Thanks for stopping by, Margaret! Glad it resonated. 🙂