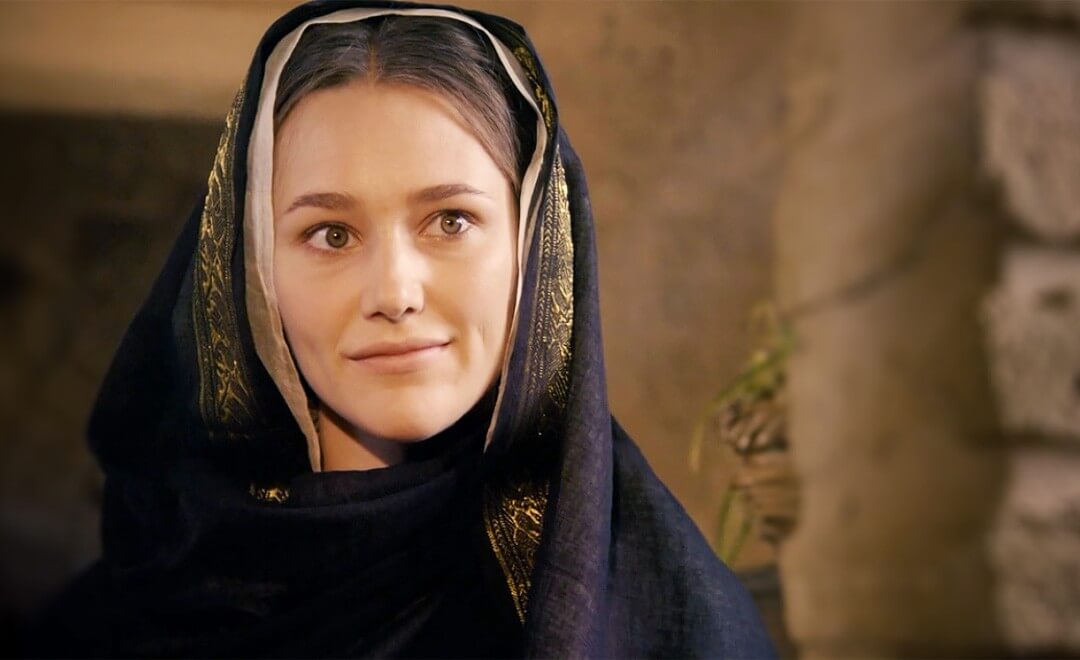 Writing this review feels like sharing a love letter. This is the first time I’ve ever seen the Blessed Mother portrayed with such tenderness, joy and reverence, at the same time with such humanity, pain and hope. ‘Mary of Nazareth’ feels like every Christmas card and painting of Mary brought into a single, enchanting vision of her life, from childhood to the Resurrection of her Son, Jesus Christ.

To quote the official website, www.maryfilm.com,”This full-length feature film about the life of Our Lady, shot in English in High Definition, was filmed in Europe in very authentic locales with outstanding cinematography, a strong cast, and a majestic music score. Actress Alissa Jung gives a beautiful, compelling and inspired portrayal of Mary.”

I would say *Spoiler Alert*, but everyone knows the beautiful story of the Lord’s Handmaid. This rendition throws into focus fresh aspects of her life and her mission, and we are introduced into a new side of Mary; we’ve seen the story so often, that we forget that real people lived through without hindsight. They had to make their choices in faith.

‘Mary of Nazareth’ brings us insights into her daily life, the daily Mary.

A personal note; I watched the full, 4 hour version available through Netflix. The theatrical release is edited down to 153 minutes through Ignatius Press.

A Story of Two Marys, and 3 Women

Right from the beginning, we are introduced to Mary, daughter of Joachim and Anne. Soon after, we meet Mary Magdalene, her close friend. In a unique twist, the story follows their two journeys, one into the heart of God, and the other into the heart of darkness.

The more Mary sings her Magnificat, the more Magdalene throws herself at the world seeking love, power and validation. The two threads finally come full circle with Magdalene’s conversion at the feet of Christ, and her ultimate reward at seeing Christ the first at the Resurrection.

But we are introduced to another character, Herodias, daughter of Herod. She is vicious, cold and calculating. She incarnates not just the evil in the film, but represents another type of response to God.

Whereas Mary opens herself up to God’s love, embracing her feminine genius to nurture and create, Herodias has closed herself to her own nature as woman, seeking sheer power, influence and security. Similar to Orual in C. S. Lewis’ novel ‘Till We Have Faces’, she sits at the center of a web of intrigue, sucking life out of those around her to satisfy her own lust for life.

In counterpoint, Mary remains the antithesis to her evil, always ready and willing to submit to God’s will, accept suffering, and sacrifice herself for others.

Caught in between these opposites, Magdalene vacillates as the flighty-headed, desperate and world-loving protégé of Herodias. After witnessing her mother’s stoning at the beginning of the film, the punishment for adultery, Magdalene throws all caution and morality to the winds, nurturing a hatred for men, and at the same time, cultivating seduction to fill her heart’s need for a true man. It isn’t long before she has two deaths on her conscience, and unable to stand the crushing weight of life at court, she flees to a brothel and ends up repeating her mother’s last scene, a public stoning. It is then that Christ appears, invites the non-sinners to throw first, and forgives her.

Between the Mary and the anti-Mary, we have Magdalene, an incarnation of each of us, who far too often vacillate between good and evil, seeking to secure our own comfort and safety, unwilling to sit back and quietly repeat after Mary, ‘Behold the handmaid of the Lord.’

Due to the nature of life at court, and Magdalene’s forays into sexuality, viewer discretion is advised.

During the depiction of the Passion of Christ, the narrative stays close to Mary, paying more attention to her pain and suffering than Jesus’, intent on keeping a focus on the swords piercing her heart, and her dogged grip on hope despite the storms.

Interestingly, the film highlights the goodness of God and the self-sacrificing kindness of Christ by setting up an antithesis in Herod and his son, Antipatas. As an inverse God the Father, Herod is power-hungry and violent, repeating the tragedy of Egypt’s Slaughter of the Innocents to preserve his position. Antipatas, son of the king, is portrayed to look like Christ, but he is an inverse Christ. He is rich and lustful, deflowering Magdalene, and courting the favors of Rome.

Whereas God loved us so much that He sacrificed His only-begotten Son to save us, when Herod is informed that an innocent Antipatas is behind an assassination plot and power-grab, he executes his son.

Giacomo Campiotti, known for his previous films of BAKHITA, DOCTOR ZHIVAGO, ST. GIUSEPPE MOSCATI, and Francesco Arlanch (RESTLESS HEART, PIUS XII, POPE JOHN PAUL II), have carefully tapped into an aspect of Mary that isn’t generally portrayed, and that is her hope.

Before the Incarnation, Mary is a young woman, betrothed to Joseph, shy in courtship and eager for marriage. Her identity and dignity is wrapped up in her relationship with God. After the Incarnation, the joy that floods from her eyes and smile is contagious. And throughout the film, even with piercing pain, she holds onto the hope that God offers her, especially in circumstances that many of us would find insane.

Update: In the Q&A titled When were Joseph and Mary Married?, Catholic Answers’ Tim Staples shows how the word ‘betrothed’ means something different today than it did then. Unlike the film’s portrayal, where Mary is depicted as pregnant before her wedding to Joseph, she and Joseph were already married. Her vow to refrain from marital intimacy is what prompted her response to the angel, “How, since I know not Man?” There is no divorce when you’re just engaged.

The Production of the Film

Prepare to enjoy not just a heart-warming portrayal of the Mother of God, but also the world in which she lives. ‘Mary of Nazareth‘ is set against a realistic backdrop of authentic locations throughout Europe, creating a world that is both believable and inviting.

From Mary and Joseph’s wedding ceremony, to the thrilling vista of Jerusalem in its glory, to the day-to-day living in their Nazarene home, life is colorful, beautiful and full of detail. Unlike the trend in many historical films to date, where the further back in the past you go, the dirtier and grungier cultures get, ‘Maria di Nazareth’ reminds us that in every age, the human spirit desires beauty and a fulfilling life, and does what it can to express that.

Also, listen for the score; Guy Farley has written a beautiful and touching series of pieces that underscore the reverence and beauty with which Mary is treated.

Have you seen the film? Any thoughts and hopes going in? Any special thoughts after seeing it?