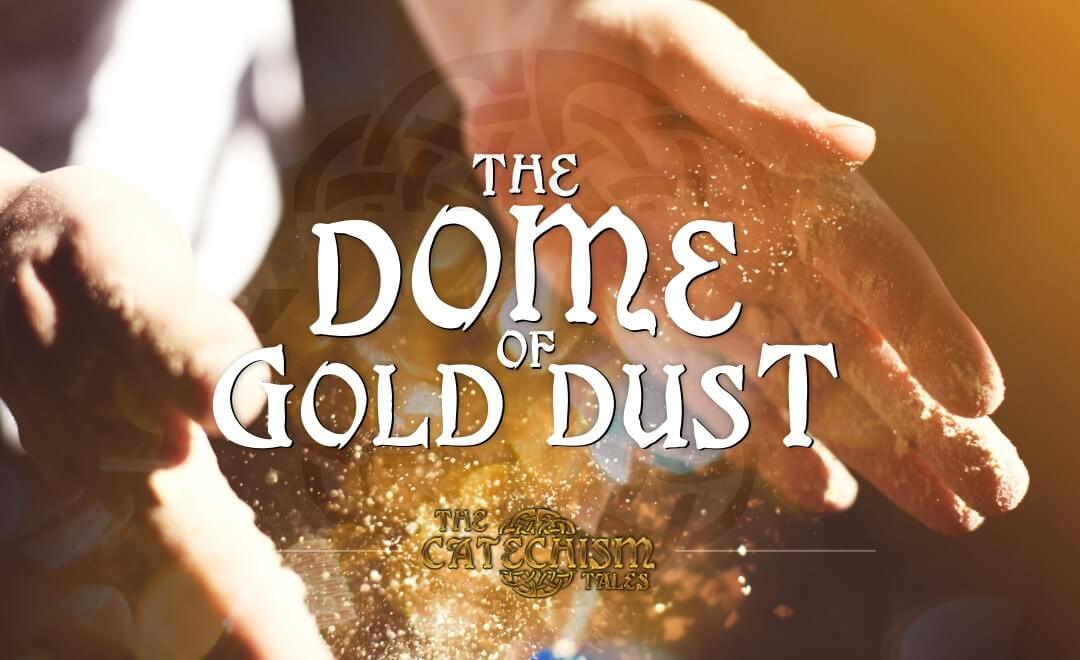 The Dome of Gold Dust | A Catechism Tale

Once upon a time there lived a young couple who made pots by the edge of a forest. They molded earth-clay by hand, stained them with color and fired them in kilns outside the back door. They were famous for their dark red bowls, pale grey jars, blue plates with real leaves pressed into them, and cream vases with berries and flowers carved onto the surface.

But the couple were not happy. Both of them were sure they were better than Adam and Eve.

Many times the man said, “If I was in that garden, I’d never pick the fruit and disobey God.” And she said the same. They would sit at the fires in their rocking chairs, and talk about how silly their First Parents had been, and how they would outwit the serpent. “Oh no,” they thought. “We would never be tricked by the Sly One!”

One day, a servant who bought pots for the king’s kitchen fell into conversation with them. When he returned to the castle, he told the king about the couple who believed they were better than Adam and Eve. The king was amused and wanted to see them. So he summoned them to court, and they arrived the next day, dressed in their finest.

When the king asked them about their conversation, they were quick to affirm that they could never be so senseless as to disobey God’s command.

The king decided to test them.

He invited them to dine with him, and took them into a private room where he liked to eat his meals alone. When the meal was over, the king thanked them for coming, and told them that he had a gift for them. A servant brought in a wide tray covered by a copper dome and wrapped with a red ribbon. The king then stood and excused himself, asking them to wait upon his return to open the gift.

The husband and wife sat back in their chairs, enjoying the wines and pastries from the king’s kitchen. An hour passed, two hours, then three hours, but the king still did not return. They tried to talk to each other to pass the time, but they were bored, and consumed by a mounting curiosity to know what lay under the dome.

They waited, tried to go to rest before the fire, ate everything that lay on the tables, but the king did not return, and they became more and more desperate to know. When evening light tipped the edges of the windows, they approached the dome and examined the fine carvings.

By now they all they could do was ask each other what it could be. They touched the bronze dome, fingered the ribbon and considered peeking under the edge. Instead they turned to study the tapestries.

It wasn’t long before they returned to the gift. Then, the husband decided it wouldn’t hurt to take off the ribbon. He pulled one end and it fell away. The copper cover glowed in the sunlight, as if asking them to take it away and reveal the treasure within.

They turned away and drank all the water, then tried to sing a song and do a little dancing together. It wasn’t long before they came back to the cover, burning to know what lay beneath.

Finally they decided to take a quick glance. They carefully lifted up the edge.

Instantly, the cover flew off and a flood of fine, gold dust blew off the platter, ran like water onto the floor and into the carpet.

They struggled to gather the gold sand in their hands and place it back on the tray, but as soon as it touched the tray, it slipped away on to the floor. They tried filling cups, but the dust never stayed in one place. They despaired of ever cleaning it up. It stuck to the carpet, and they could not shake it out their clothes.

Then the king came back in, who had been watching them from a secret place the entire time. He was displeased.

And he turned them into two pots made of green stone, filled them with all the gold dust and placed them at the front door of the castle, where everyone could see them and learn from their error.

Parents’ note: while many of us may not go so far as to directly compare ourselves to Adam and Eve, we generally compare ourselves to others and imagine in like situations that we’d do better. In keeping with a true spirit of humility, we shouldn’t assume that we have it in ourselves to be better than anyone – all goodness comes from God and is a response to His invitation. Let’s keep in mind that we well might be worse than those we look down on because of the subtlety of our pride, and lets pray for the grace of God.