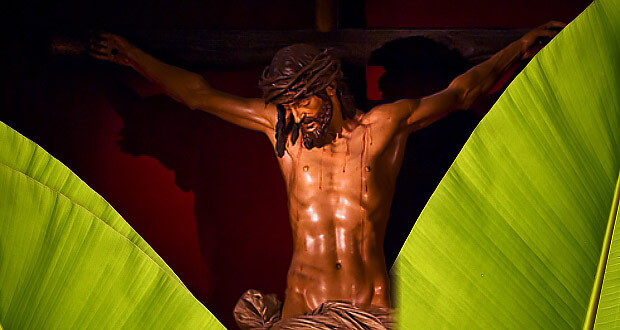 The God of Golgotha | A Poem About History and Christ

A meditative poem told through the eyes of Jew who witnessed flowering of Palm Sunday, and then the growth of Golgotha. With the rending of the Temple veil, he is granted a vision of the Paradise angel who, in two strokes, shows him that Eden, Sinai, Tabor and Golgotha are chapters in the same story, and that Christ-God is now our Eucharist.

A Taunt to War

A stranger I was in Israel that year,
When I heard that a King had arrived.
I then fled to the gates and beheld Him astride
A white ass with green palms round and wide.

All my life I’d remained a good Jew ‘neath the Law,
Firm rejecting the lies of Gentiles,
For our Faith we the folk, the small People of God,
Did endure Roman heel and Rome’s smile.

So a king was a grace! A Davidic return,
Come to free us from th’ache in our souls.
Him I saw on that ass, Him I bowed as He passed,
And I went home all ready and whole.

Not a week had gone by when another outcry
From the gates stopped me on my return,
And I paused, and I pressed through the men in the streets
And I wondered what made them so stern.

T’was that King once again, Whom I’d seen ‘neath the palms,
Now with groan and with blood on His brow,
Shaded now ‘neath an old and a dead husk of wood,
All his courtiers His enemies now.

After that He was gone and I heard naught else till
A third shadow arose from afar,
And I saw three, thin shapes standing stiff, standing tall,
Three gaunt teeth taunting our God to war.

All this passed by mine eyes like some dust on the breeze
And at first my heart heavy it lay,
For I now felt dismayed, as if cheated I’d been,
And now back to my chains must away.

It was when I did pack all my clothes in my bags
And I thought of the roads long ahead,
That I learned of the tear in the great Holies’ Veil,
And the blood drained from my heart like lead.

“The veil’s shorn in half,” went the cry all around
And the guards running out did confirm.
On my knees I collapsed, my prayers churning with thoughts,
Wond’ring why God His throne would infirm.

Enter Deep in the Journey

All the noise fell away, all the shouts and the jeers
And I fell into blackness of night,
I stopped on a plain where the stars held their breath
And an angel there filled with fright.

On my knees I did fall and mine eyes groundward bent,
I did grovel and hide from his light,
For I knew whom he was, I had heard of him oft,
It was he guarding Paradise bright.

With his long sword of flame he reached t’ward me and crossed
Two harsh lines in the earth neath my face,
And then burst into flames and on whirling smoke winds
And of incense he fled from the place.

It was clear to me now.  I knew then what we’d done,
And it went back all so long ago,
When a man and his wife in a Garden long gone
Took their pride and in God’s Face did throw.

This their sin was so great, so black-hearted and sere,
That outcasts they were forced then to be,
And their children were stamped with the mark of their act,
Made to live ever unnaturally.

His need and his urge to be one with his God
Drew Man back and again to find faith,
And behind gentle smiles and alluring deceit
Satan whispered and grinned like a wraith.

Man had found God again! Yes, God rested… within!
And in honor and glory to self,
After forming an empire through blood and through pow’r
In the sky he created a shelf

Made of stones, piled on high, one on one to a point
Where an altar was formed to adore,
Not an idol, no, no, nor a demon-god dark,
But himself and how he’d from God tore.

God came down and destroyed and to all round the earth
Cast these men and their blasphemous rites,
And again they began building mountains of stone,
Only now to the Killer of Lights.

Histr’y passed and in all of His Mercy Divine
God inspired a poor tribe with the Truth,
And from old Sinai high, ten commandments He carved
And revived starving Man with His Breath.

When the lions and bulls of that Babylon strange
Swept away Israël into chains,
Remnants all fled to worship their gods
On the mountain tops, never on plains.

For in all mankind’s thought, mountains are where divines,
And where God and the gods reign supreme,
Shrouded in the sacral and in silver mystr’y.
Nowhere else just as holy did seem.

And when Christ-God did come, His decrees and His day,
He showed Jewry from on mountains high,
Like the Mount Sermon sweet, and Beatitudes Eight,
And on Tabor He let glory fly.

And it was on such a mount that our Christ-God was killed
When He came with His Kingdom of War,
Not against th’enemies of the People of God,
But against primal pride in selves our.

God’s High Priests led the charge.  Infidels grabbed the nails,
And mankind gathered round, laughing hard,
And they hammered his form, writhing in silence red,
To an altar hoisted heavenward.

On a mountain they killed, on a place saved for God,
Twixt the garbage that mankind refused.
And as He o’erhead hung, they did dare to approach
And to challenge Him to Himself loose.

He Himself had plain said that He gave Himself up,
And that none had a power over Him.
Just imagine that sad and eternaline smile
That He had neath His eyes’ bloodened rim.

It was th’end. Now what next?  What could follow on this?
For an age man  had waited his Christ.
Then He came and it was not enough simply just
To reject and cast out in cold vice.

No, to mountain they rushed, and they nailèd Him there,
And they challenged, defied to His Face,
And when Spirit He breathed and He sank His crowned head,
They rejoiced, and like Eve, spat out grace.

Blessed be God, and again should blessèd He be,
For not charging us with Deicide,
And instead He allowed that we plant Him in ground
So that three days apace He would rise.

I awoke from this dream and I stared up around
At the world, how with all that we’d done,
The people still shopped and still haggled and fought,
And I strove to see how anyone

Could remain still the same, when close to Temple ground
We had torn Him from Sanctuary,
And with laughs, on an altar of stone and dead wood,
We had sacrificed Divinity.

Oh my God, my sweet Christ, saving us from Eve’s sin,
And from th’arrogance of Solomon,
Wage in me ‘gainst Satan, pierce a war on my pride
That I may always run the race on,

For each day round the world still again do we raise
Thee on high in a White Sacrifice,
On a pyre of stone, silent angels around,
For we see Thine action as our Christ

Who unites three old  mounts, Sinai and Tabor and
Gathers them with the Mount Calvary,
So these altars before which we kneel we see hold
Old and new and a deep etern’ty.