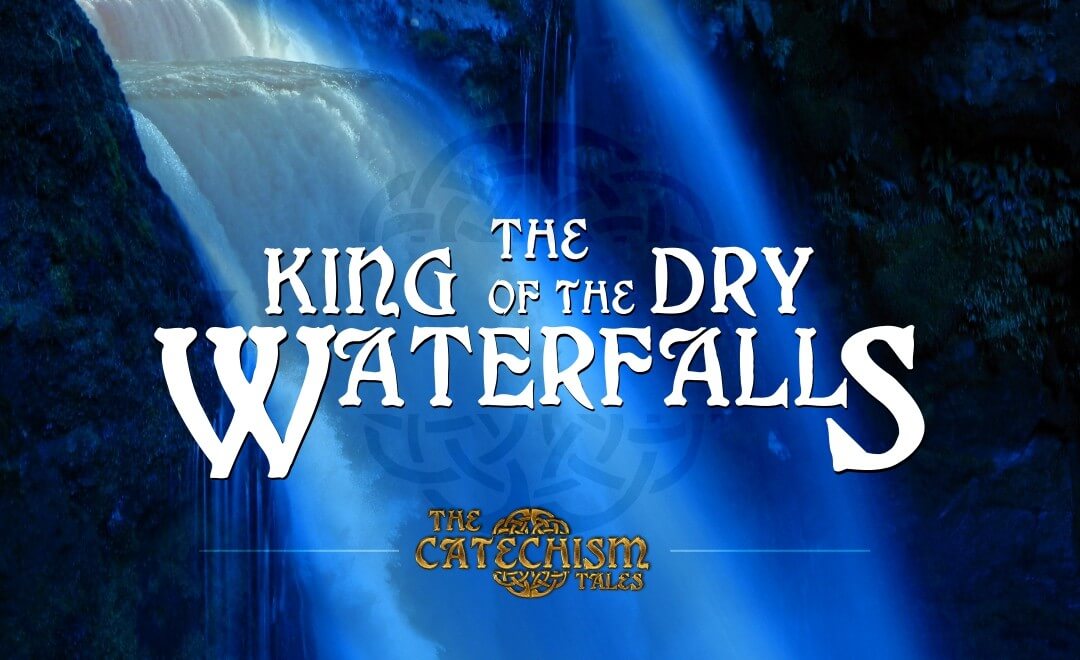 The King of the Dry Waterfalls | A Catechism Tale

Once upon a time a great river flowed from the mountains. No one could cross it, for it gushed deep and wide, and many sharp rocks lay beneath it surface. From the white snows that fed it, it flowed through many great kingdoms, past deep forests casting their amber leaves to the fields of golden grain growing on one side and fruiting orchards on the other.

Where the land met the sea, there did the river become a waterfall, a waterfall so great that the water went white as it fell through the air and dashed into the foaming whirlpools beneath. Pearl-grey mists hung in the air sliced by bright rainbows. High pinnacles and grassy cliffs drenched in ivy lined its thundering banks.

Ever since people could remember, various kings had tried to build a dam to harness the will of the water, but the river was so strong that it swept their stones away. Hundreds of stone blocks had vanished over the waterfall edge, never to be used again. The dam builders day and night, with great fires and many workers to help cut the blocks.

After many years, people built houses, farms and sprawling castles to house the, families, knights and ladies. The greatest bridges spanned the river and as many towers were built as there were spires of stone. It was established as a kingdom, and he spent all his money and time trying to build the impossible.

During this time, a general despair grew in the people’s hearts. They couldn’t create a wall because of the torrent. The king became so enraged that he promised his whole kingdom and his beautiful daughter to the man who could stop the river. In these times, an offer of both a such wealth and wife was a uncommon bargain.

These proclamations were sent to all the kingdoms, and scores of strong, young men tried to build the dam. But they all failed. They returned home with neither scepter nor marriage, just bruised hands and pnemonia.

Now there were two princes. The older one was fat and lazy, busying himself with playing cards and eating pastries each day, with never a thought about doing anything more. But the younger one was strong, going frequently on hunting trips and braving dangers. He studied in the evenings, filling his head with all sorts of useful information like how to lead armies, construct buildings, and mend wicker baskets.

The lazy prince received the proclamation because he was older, but he didn’t like to have to work for the reward. He would much rather have the princess and the kingdom with out doing anything for them. So he tossed it into the fire and ignored it.

Soon afterward, the younger prince decided one crisp morning to take a long ride and exercise his horse. For three days and three nights he rode along forest paths, listening to the birds and helping travelers. On the third day, a traveler told him about the great challenge to dam the river, and the prince instantly resolved to go and try his luck.

When he reached the great waterfall, he was amazed at the magnificence of the city massed about its banks. He sat down on the grass, watching the water and thinking deeply. By and by, he became hungry, and pulled out some lunch. When he took out a sack of berries, it slipped from his hand and the berries tumbled out. He grabbed at them as they rolled away, and then quickly snatched up the sack to close it fast. As he put it safely back in the saddlebag and collected what he could, he realized that could solve the problem. Find the place where the water comes from, and stop it there.

He mounted his horse again, and rode out of the city, following the river’s banks. He passed the orchards and the fields of grain, canyons filled with crumbled rock, the forest with their amber leaves.

Finally, on the seventh day he came to the mountains, their heads cowled with snow. With his trusty steed, he trotted up the mountain until he reach the cold, quiet meadows warming into snowmelt. There he found a stream flowing from the mountain’s heart. The source of the river. If he stopped it here, it would run no more.

Happy that his task was almost over, he cast about in search of something large, and found a great, red boulder as big as a giant’s marble on the streamside. He pried it loose with his sword and lashed his horse’s reins to it.

With a few tugs from his horse, the rock slipped from its place. It stumbled into the stream and with the work of the horse, was lodged up against the hole in the mountain.

The stream splashed helplessly behind the boulder. Soon the river running down the mountain eased away like a long, blue ribbon, until the last of it fell over the waterfall and the riverbed became as dry as earth. As proof of his success, the prince hacked off a piece of the strange, red stone and put it in his satchel.

Now the fat, elder brother of the prince had also gone for a ride, and met the same traveler who told him of the great kingdom and the dam. When he saw the river run dry, and that the prince had triumphed, he became jealous.

He met up with the younger prince as he rode down the mountain, and asked him to tarry a while and tell him how he did it. When the prince turned his back to point up toward the snow meadows, the elder brother struck him down and tossed him onto the riverbed. Then he rode to the kingdom and took all the Credit for stopping the waterfall, married the princess and called himself the king of the Dry Waterfalls.

The young prince lay in the riverbed for a long time, gravely injured. He would have died if a young peasant boy hadn’t come and brought him water in a pouch of leaves and some fruit from a tree. Over time, he became well again, and returned to Waterfall City.

In front of the court, he denounced his brother, and displayed the piece of the red rock. The peasant boy also stated that he had nursed him back to health. The king was enraged that the elder brother had lied, stripped him of his title, and locked him in a lion’s pit for trying to kill his own brother in cold blood.

The princess then married her rightful husband, and the young prince became the real King of the Dry Waterfall. And they lived happily ever after.

Parent’s note: This story concerns the futility of ignoring the source. When it comes to vice in our lives, the most effective way of damming up problems is to find out where they start, usually a smaller situation that is more manageable.