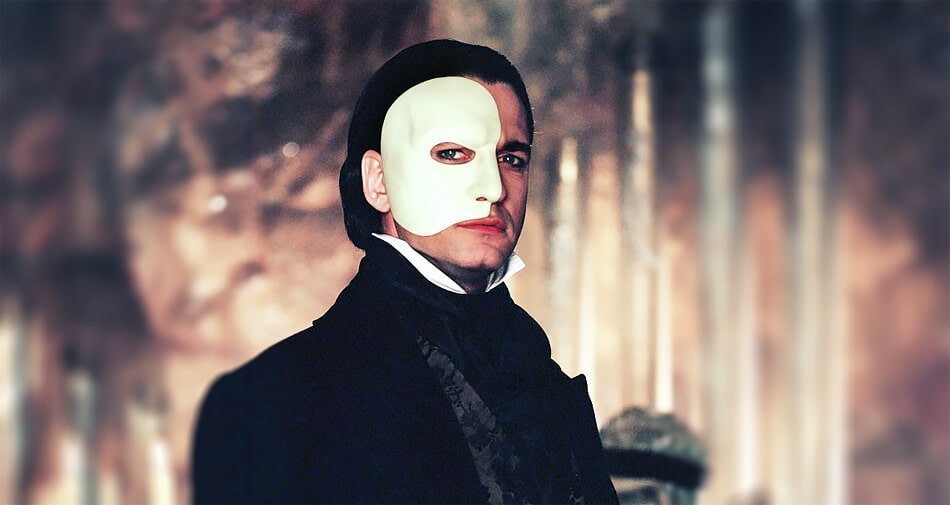 The Philosopher of the Opera: A Short Story

Christine staggered to her knees and snatched at a step rail studded into the tile, kicking off her slippers to grab traction on the outer surface of the dome.  A gale whipped at her white gown, tugging her hair free of its silver net.

Pulling herself up onto a ledge, she swung around and stared out at the vast, black gulf of air over the glowing galaxy of Paris.  High above the Garnier Opera House, the world was silent and empty, like a mountain top. Only the wind, slicing and growling through the great, gold angels and scores of stone cherubs.

Her knuckles went white. She heaved frantic, bleeding breaths.  She’d never been so high in her life.

A footstep crunched above.

Her heart stopped.  She swung around.

Against the mauve cloudscape, a figure stood frozen, his stage cloak whipping free on one side like a banner. The other side curled round him against the cold.  Everything was theatrical, from his etched, knee-high boots, to the ornate vest, the broad gloves and…

A stark white mask covered his face, keeping clear of his mouth.  His eyes were fixed on the last weak rays of the sun as it set in a swelter of red clouds and grey stars.

He turned to face her.

He watched her somberly.  “Well done,” he said.  “You’re hanging on the edge of the world. A good place to start.”

She glanced down at the swelling belly of the dome falling away from her perch.  “I’ll die if I let go!”

“If memory serves, not five minutes ago you were singing about suicide.”

Her ears popped.  “That was in the play!  Not reality!”

“Then I suggest that you hold very tightly, madame.”

“Help me up!” she shrieked.

She felt herself slipping. She quickly sat down, dangling her feet over the abyss of shadows and windows.  “Why?”

“You saved my life.”

She glanced at him.  He was staring down at the streams of people fleeing out into the plaza, away from the chaos of crystal and shredded silk masking his exit.

“Who are you?”  she whispered, her throat hoarse.

“But I’m the shadow that’s more real than all the souls in Paris.”  He smiled.

Her heart beat faster.  Not only a kidnapper, but insane.  On a dometop.  She decided that she’d play to his pride, and perhaps, have a chance to get back up to the doorway from which she’d been thrown.  From there it was a quick trip down the ladder back to the stairs and then the main gallery—

“I feel like Columbus, and Adam, and Alexander, and yet, myself,” he mused.  “I’ve looked at the stars, and am glad that there’s nothing else. And yet…”

Christine cleared her throat.  “And yet?”

“When you ruined the song tonight, I discovered something. A deep truth.”

“Ruined? What discovery?  What are you talking about?”

“Listen carefully.”  He crouched and tapped the dome with a finger.  “Do you know what this is?”

“Why does an opera house exist?”

She glanced up at the doorway, and thought quickly.  “To produce operas.”

Her name on his mouth stopped her dead.

“ ‘All the world’s a stage,’” he quoted.  “And ‘the play’s the thing’.  That’s why we enthrall with stories.  They are memories to help us remember.”

“That our opera isn’t over yet.”

Christine felt her blood beginning to boil.  He was not only insane, and her hands were getting sore, but he was also irritating.  “What is your point, monsieur?”

He leaned back against a lead-lined window.  “Let me tell you a story.  In this very opera house, a blighted boy was born to a madonna.  They threw him out. A doorman shuffled him through a crack in the foundations, and raised him in the graves and hollows of the world beneath.”

He glanced over at here. “Madame has read of many such blighted children. Some grow into the great heretics of humanity. But not this boy. He found a grace in the dark. His solace came from the echoes of stories, plays and operas…”

“You are this boy?” Christine asked, shifting her position and drawing her foot up onto the ledge.  If he stayed focused like that, his glittering eyes staring sightlessly at the sunset, she might be able to surprise him and push him off.

He passed his hand over his eyes.  “I’ve been blind my whole life.  Until I saw you singing, Christine. Your voice melted the scales from my eyes.  You sang about the emptiness of life, and the glory of death.  And in that moment, I realized.”

He pointed at the crowds fleeing the plaza in carriages.  “That you were wrong.  So wrong.  And that’s why Man hurries to flee here.” He waved at the crowds. “They’ve lost the plot.”

She snapped.  “Would monsieur care to either enlighten me, or cast me from this ledge. I demand to know your intent.”

“Modern man has destroyed the universe,” he patted the roof again, “without touching a brick.  He has grown dissatisfied with the opera because he has stopped acting in his own story, or stopping to enjoy other stories.

“It’s as if he has explored behind the stage screens, and found a world of woodwork and painted backdrops, clockwork ropes and sandbags, with suns stacked against reams of cloth and paper. He has cast off the ‘mere, mundane explanation’ that they are only props. He has stopped to study each one, seeking a meaning in this colorful chaos. The obvious can never be true. And he fires the stagehands and the common folk for simple truths. When these arcane artifacts yield no answers, he dubs them pointless.”

Christine rubbed her arms against the chill, and pulled up her other foot.

His voice gained power and intensity.  “These men go insane, for they can find no reasons recorded anywhere, no writing on the walls illuminating their purpose.  And so they declare that there is none, no purpose.” He seemed to smile sadly.  “And nothing can tempt them back to their seats, because they deny that there are any seats, or stage doors.  They are convinced that the world is far too complex to have such a simple answer as a ‘stage’ for a purpose. They are too intelligent for common things.”

He turned to Christine again, and his smile gained strength.  “And that is what I want to bring to Paris, madame.”

“Our world is done with dreams and visions. We need dust off the oldest one again!  History is not a blind force randomly crushing and spurting life into a pointless future.  It’s a story to warm the hearts and hopes of mankind.

“The beauty in this Story is so great it freezes the soul, and melts the blood.  It’s full of passion and despair. Drama hangs on knife-edges, where even a stableboy’s lines, at the right moment, can save the neck of a nation.”

Christine stared at him.  “What story is this?”

“There is only one, but it is told a thousand times, and with a thousand mosaics and lights.  An embroidered pattern is a wasteland to a single thread. To the seamstress, it is a Persian dream.

“I am the shadow in the dark, watching the stories for years. Watching how we laugh at them, cry with them, and return to our lives. What happens when the shadow wants to leave the cave, because men are welded to their seats? When the shadow hungers to haunt the sunshine, and cast his own shade to cool a friend?”

Christine’s mind flitted past a memory of a Greek metaphor…  Her anger was a coppery boil in her throat. Her arms were exhausted, shivering, shaking from hold on.

“And this is why I raged this evening. Why I lashed out with a fire and a sword and brought down the stars. This opera was a mockery of your humanity, madame.

The last ray of sunset winked into purple oblivion.  A star poked through overhead, clear and white.

He shook his head dreamily.  “What I did tonight has been done before.  Tonight, I shattered the painted sky and dropped a titan of fire and diamonds onto a people.  And some of them awoke from their sleep. Most of them will rush home, and in the deadness of their souls, press into their pillows and resume their routine.

“But… some will be startled to life.”

“You could have killed those people!” She raged.

“I gave them warning and time.”

“You have taken me prisoner!”

“I’ve borrowed your time. After which, never again.”

“You’re crazy. You almost killed the audience because you can’t stand a song?”

Her heart fluttered. “What do you want of me?”

“Just listen. I have no one to hear my discovery. God came from the wings like all the other actors, and shared a peek at Table of Contents to all operas.

“But we pushed him up on a pedestal, crowned him king, paid our taxes, and went back to the dismal drudgery of wiping windows”

He shifted and turned to her.  “Every part in a play is crucial.  The opera collapses if even one actor fails to appear, or perhaps, invents his own tune.”

“Is monsieur telling me that everyone’s life is scripted?”

He smiled. “Only a master playwright creates a cast that is mankind itself, where everyone matters and everyone has a part only he can freely choose to play.  It is only in the audience that all things are made clear, and the cast only joins the audience when they are done.”

He stood up and stretched out his arms at the single star, his mask a white glow above a whirling black cloak.  “The best writer is the one who remains invisible, who doesn’t get in the way of the opera.  You, the reader, are enthralled at the events, the dialogue and the characters, and slip into the fantasy created by a creative mind.  The writer is the phantom, the shadow in the wings.

“I have rediscovered an Opera as old and as new as that star.  Only it never changed.  We did.”

“What are you going to do?”  Christine asked.

“Nothing. It’s not for me to do. I’m cursed to be one thing. The phantom who watched an opera, and came to life.”

“As free as you ever were.” He turned to leave.

“What is your name?”

He paused and thought for a moment.  “The Phantom… of the Opera.”

And then he was gone.