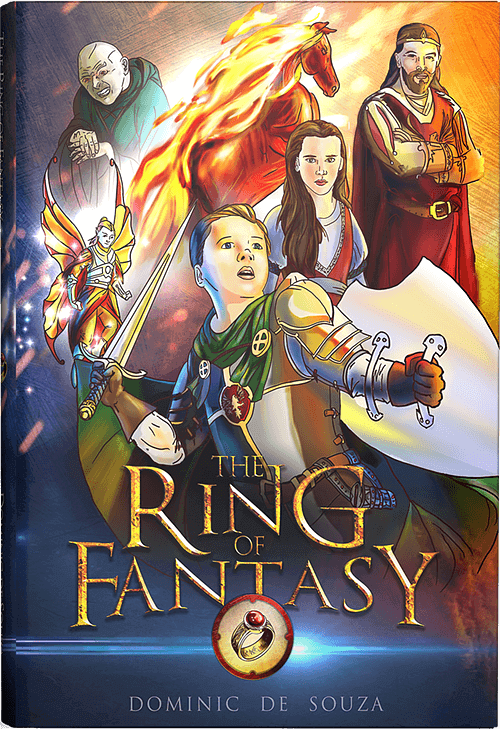 The Ring of Fantasy

Joshua and Tess Douglas tumble into a magical world of adventure. An ancient prophecy known as the ‘Fragment’ warned of a danger to the Land of Fantasy, and they are destined to stop it. Tess is instantly kidnapped away by an evil Wizard. Joshua must rush to collect his enchanted weapons so that he can rescue his sister and save Fantasy from invasion.

Amid beauty and battle, Joshua meets flying horses and nyads, faerys and dwarves, ghosts and bathorses. A gripping children’s story from the first page on that doesn’t let up till the end! Great for reading aloud to ages 5-11!

A Note from the Author

In 2001, I grabbed a pen and some lined paper, crawled under my parent’s bed, and wrote the first lines of this novel. I was thirteen years old.

Over the next few months, I kept adding to it and filling it in, convinced that I could be a published author at a young age. I drew maps and colored them in, all the time delving heavily into Narnia, mystery authors and general fiction.

As you will see, some of the names on the maps are drawn straight from a map of Ireland; it was my inspiration at the time. I see this book as an insight into themes and topics that attract children of that age, perhaps a little younger.

It has been re-edited over the years, and now this new edition brings you a story that your child will enjoy to read aloud, just like my youngest brother did when he was ten.

Chapter One: Finding the Ring

Joshua Douglas clutched the bottle of milk to his chest as he raced home through a small English village. The dull grey clouds hung low to the ground like a damp cloak.

World War Two had just begun in the skies over Britain. The hum and blast of bombs dropped from German bombers shivered the bricks in the buildings.

He leapt a fence into the granite ruins of an old factory, pounding through the tall grass poking through the pavestones. He fought to keep his breath as he sped among the cracked pylons.

He tugged his woolen cap tighter on his head, pushing his brown hair out of his face. His dark eyes kept watching for holes and openings.

Then he heard the sound.

It was a terrible sound; the sound of a harsh, buzzing drill that echoed through the sky. He looked up.

Above the tall walls and empty windows, a heavy, grey German bomber roared low, chased by a green Spitfire. The bomber ducked and weaved, trying to get away, but it couldn’t evade the nimble wings and maneuvers of the fighter, silvery lines of bullets smacking holes in its undercarriage and cockpit.

The bomber shivered and peeled sideways, smoke billowing like black banners from its fuselage. And then it started falling, groaning with the terrible growl of a dying Titan.

Joshua’s heart leaped into his mouth. He grabbed his cap in one hand, the milk in the other and ran. He looked over his shoulder.

The bomber dived out of the huge sky straight into the ruins of the factory, churning up broken tables and stones and dirt and flying glass.

Joshua threw himself behind the protection of a huge steel girder in terror. He covered his face with his arms. The bomber skidded and slewed and bumped across the ground toward him.

Joshua cringed and tucked himself against the pillar. The paving shook beneath his feet.

The bomber rammed into his pillar and jerked to stop, spitting off bits of metal and smoke all around him.

Joshua waited for everything to fall silent. Then he carefully opened his eyes. He stood slowly and took a few steps.

And then the bomber exploded in a cloud of fire and dirt, throwing him clear across the room.

Sods of earth rained down through the smoke, forcing Joshua to keep his mouth buried in his elbow to breathe. As the smoke cleared, he stood up and brushed the dirt off, his ears ringing.

The ruined bulk of the flying machine was shattered in pieces, scattered around the rim of a huge, charcoal crater.

He bent down to pick up the intact milk bottle. And then noticed something strange.

Something glowed in the middle of the crater.

He stepped closer and peered in.

In the middle lay a muddy ring.

He carefully slid down into the pit, the sides hot through his thin shoes. He crouched over it and stared.

It was crusted thick with dirt. He picked it up. It was cool in his palm. Some of the dirt flaked off, and he saw a glint of red – a ruby?

Then once again, he heard the deep drone of the Spitfire whipping by overhead, and the scattered shouts of people running toward the factory.

He tore off through a hole in the wall, hopped the fence and ran through cobblestone streets all the way home.

“I think this novel was a great read aloud, as it is advertised. The chapters were short, but filled with enough descriptive language to keep our family motivated to keep turning the pages to see what was the next adventure for the main character, Joshua Douglas. I loved how all ages could enjoy this book together and it was fun to discuss with our children what they thought was going to happen next in the story. I would highly recommend de Souza’s book for any family.”

Read the full review by ‘A Slice of Smith Life‘

Opening under the war-torn skies of WWII Britain, Joshua Douglas discovers a ring that transports his sister, Tess, and himself into a bright and wild world called Fantasy. There, they learn that they have been prophecied for generations, and are expected to preserve Fantasy from an evil invasion.

A crafty wizard instantly kidnaps Tess, hoping to divert the children from their task, forcing Joshua to rush from forests to glades to pick up his fabled weapons, prepared for him by a mystical ‘Ringmaster’, the land’s creator. With the help of a burning horse, he rescues his sister, defeats the wizard and rushes back in time to join the great battle for the freedom of Fantasy.

‘The Ring of Fantasy’ is a ticket to a wonderland of talking animals, beautiful creatures and plenty of fast-paced action, held together by the bond between two children, fired by humility.

More than a child-hero, Joshua is on a curious and crucial quest; he incarnates a Christ-figure clad in the armor of God with a quest no smaller than the fate of the entire world. His acceptance of and cooperation with requests greater than his weakness brings about the happy salvation of the world of Fantasy, another central theme to the story.

The genre of fantasy has come under much attack and abuse over the last century, turned toward the pornographic, the occultic and the wierd. The lines between good and evil are blurred, and good is replaced by strange or amoral figures. Through his characters, the author is on a quest to reconquer that strange and mysterious realm that lies just beyond reason and before faith.

More than any other genre, fantasy and fairy tales are the oldest and most important of tale-telling, since in their truest forms, they deal with spiritual realities, incarnating them in forms fantastic and tangible to a child’s mind. For this reason, ‘The Lord of the Rings’ and ‘The Chronicles of Narnia’ stand head and shoulders over the competition; inspired by the deeply symbolic and relevant truths of the Catholic Faith, they peel back the veil of greywash on our world and reveal the highly-contrasted reality of the spiritual realm.

And this is where ‘The Ring of Fantasy’ strikes a welcome chord; the lines are drawn between beauty, enchantment and goodness against uglinesss, barbarism and dark magic. The invading armies despise beauty, committed to a creed of destruction and colusion with evil.

Once again, the Magnificat shines through as God’s preferred plan to put down the mighty from their thrones and exalt the humble. It is through Joshua and Tess, children from a different world, that the will of the Ringmaster is brought into effect, similar to Joan of Arc, David and Goliath, Mary the Mother of God.

From the beginning, the story hits home on a number of levels that speak to a child’s deepest thoughts. Most children feel themselves caught between the vast and unpredictable pressures of the grown-up world, oftentimes bewildered and scared at their own inability to provide solutions. The realm of play, and fairy tales, is a chance to escape into a fantasy where solutions are possible, where they are wanted and hoped for, where bravery and courage bring about hopeful and happy change. This escapism brings relief and direction, shoring up the child’s mental and spiritual resources for adulthood.

This satisfying psychological journey is painted with the contrasted brushstrokes of the best fairy tales. It is set against a backdrop of bright beauty and dark ugliness, where the reward for evil is death, and beauty and goodness are welcome companions.

The story was initially written when the author was thirteen, drawing inspiration from The Chronicles of Narnia, the Lord of the Rings, the Book of Revelation and fairy tales. Over the years, it has been mildly re-edited, and a greater focus laid on enhancing the beauty and latent religious themes.

A deeply committed Catholic and book-lover, the author Dominic de Souza was born in New Zealand, raised in Australia, studied in Fiji and France, and now lives in the United States. At eighteen, he graduated a course at the Writer’s Institute for Children’s Literature for Journalism and Writing for Children. He currently works as a graphic designer and illustrator. He is recently married to his wife, Maria.

The style is written simply and directly, making it an easy-reader for young ages, and great for reading aloud to children from 4 to 11. 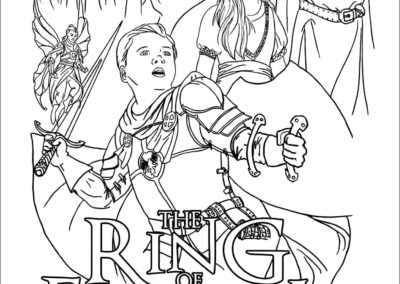 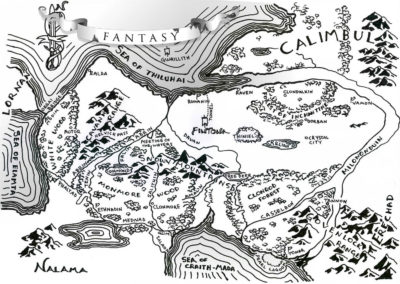 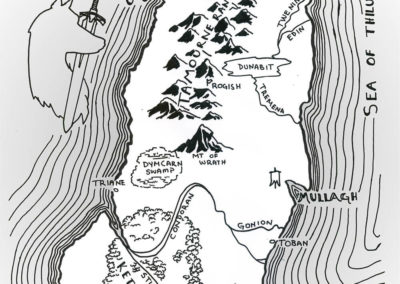 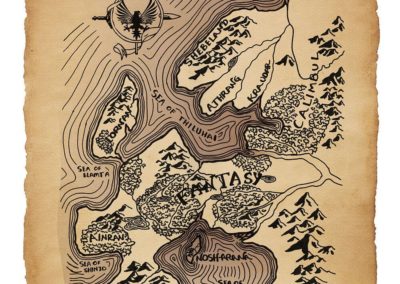