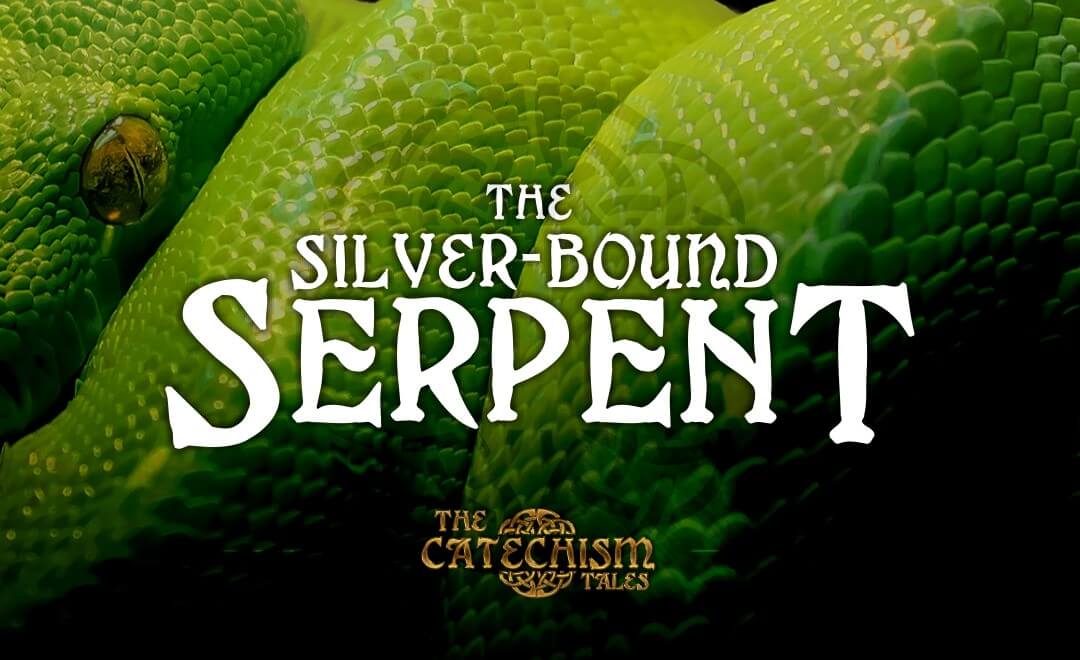 The Silver-Bound Serpent | A Catechism Tale

Once upon a time in a land far away where not all evil beasts were yet slain or imprisoned, there lived a snake so venomous and dangerous that the king commanded its death. It swept across mountains and farmlands, devouring cattle, ravaging villages and casting fear into the little folk. With a dark lust for gold, it gathered treasures and thrones, even stripped the gilt roof lining of the churches, to create a glimmering nest.

His army finally cornered it in a huge cave, and the king’s Guardian Angels bound it with unbreakable, silver chains. The serpent roared and thrashed and fought, but the Angels’ grip was as solid as a mountain. The beast was imprisoned… but not yet dead. It swore that one day, it would find a way to be free. And on that day, it would make its nest in the heart of the kingdom, and feast on the people.

The king himself tried to kill the serpent, but barely escaped with his life. The The King’s Advisor announced that only a heart free from evil could slay it. Any others would be in danger.

The king formally proclaimed that any knight pure enough to slay the beast could keep its entire hoard. Princes came from all over the kingdom, hoping for the fame, glory, and glittering prize. One after the other, they entered the cave, and never came out again.

Two princes of a nearby kingdom received word of the snake. Intent on the treasure, the elder brother set out immediately, without saddling his horse or gathering provisions. He had to live off wild fruit and nuts the whole way.

At the mouth of the cave, he met the King’s Advisor, now an old man with a great grey beard. He rose from his seat by the side of the cave and warned, “Beware the serpent, it may come in a pleasing form, but it is a liar!”

So eager was he to feel the gold spilling through his fingers that the elder prince brushed past him and drew his sword.

But in entering the cave, he did not see a vicious serpent, but rather a young maiden lashed to a wall by chains of silver, flanked by the guarding angels.

Keeping a wary eye for the snake, the prince approached the bound maiden. When she heard his footsteps, she looked up a sweet smile and a pleading gaze, begging him to free her.

He faltered, and lowered his sword.

She told him that she was a good princess whom the evil king hated. She begged him with tears in her eyes to free her, and promised him that, if he did, they would then become king and queen of a kingdom where the sun would never set and the trees bore golden fruit.

In his greed, the prince ignored the old man’s warning and split the chains with his sword. The princess instantly changed into the fearsome snake with eyes white with death, scales black with dried blood and a mouth great enough to devour him whole. With a roar, it drove its teeth into the prince, and choked him down.

This was how the serpent treated all the knights who came to slay it. Eager for gold, beguiled by the beauty of the weeping maiden, the knights ignored the grey wisdom of the old man and became feasts for the snake. Each time, the Angels renewed the chains and returned the snake to its place.

When the younger prince learned that his brother had died, he took up his sword, mounted his horse and rode to the cave. There he also met the old advisor.

The young prince leapt from his horse and helped the man to his feet. He offered him some of his provisions. The old man was extremely grateful, and told him with great solemnity, “Beware the beautiful lie.”

He promised to heed the old man’s warning and entered the cave. He saw a gentle, young princess weighted down by chains, two shining Angels grimly keeping her bound. Around her lay the ruins and remains of knights, armor and bones picked clean.

At first, the prince was tempted to pity her, but he remembered the old man’s final warning. He took some cloth and wrapped it round his ears, so that nothing she could say could change his mind.

He drew his sword, ran up to the princess and prepared to slay her. She turned her soft gaze on him, a tear in her eye, and asked him to free her. Unable to hear her sweet voice, his resolve strong as a lion, he swung his sword to destroy the liar.

Realizing it could not trick him, the princess changed back into a rearing serpent. As he struggled to stay clear of its fangs, it wrapped its great, black coils around him to crush him. With a great blow, he struck off its head, and the great coils fell limp and dead around him.

The young prince cut out the serpent’s forked tongue and he presented it to the king. The king then offered him the hoard of glittering jewels, coins and crowns.

The two Angels stayed at the prince’s side to guard him from further danger, and he lived happily ever after.

Parent’s note: This story concerns the beguiling nature of evil, and the importance of not only remaining steadfast against true evil, but seeing through the lies. Although the story conveys a simple message, as time passes, we need to teach our children to enter more fully into the principle of Phil 4:8, ‘whatever is noble, lovely, right, pure, admirable – if anything is excellent or praiseworthy – think about such things…’, wherever it is found, and also 2 Corinthians 11:14, “…Satan himself masquerades as an angel of light.”