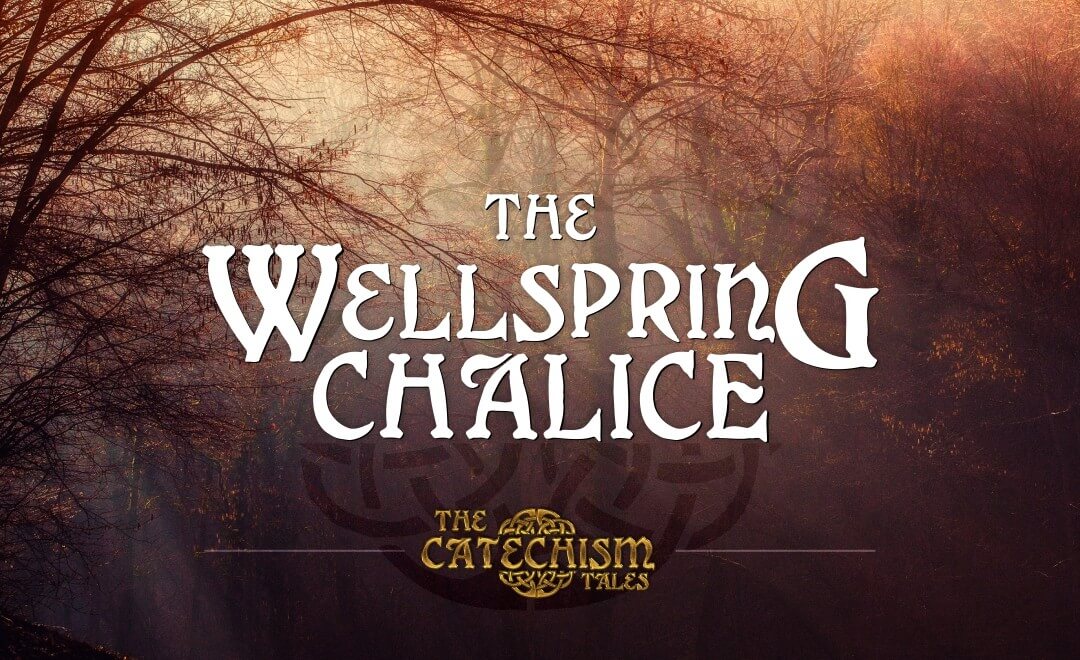 The Wellspring Chalice | A Catechism tale

Once upon a time, two young, twin princesses lived in a great castle near a lake. They were both completely identical in beauty, but completely different in manners. One enjoyed courtesy and kindness, and the other reveled in greed and indolence.

On this day it was their birthday, and all the lords and ladies flocked to the main hall to feast with song and dance.

The younger princess was careful to be gentle to everyone, standing near the door and greeting them. She thanked them for coming, and made everyone feel welcome, even those who were too old or small to thank her.

But her older sister was relaxed sat on her throne and basked in the praise of her guests. She thirsted with a horrible desire to hear people tell her how lovely she looked, how beautiful her dress, or how nice her jewels. She couldn’t stop herself, even when it became an embarrassing.

The younger sister happily tied on an apron, and served everyone their meals, quick to laugh and sing among them. Everyone loved and respected the younger sister, but had no respect for the elder. Try as they would, she wouldn’t listen to their gentle rebukes.

When the meal was almost over, the princesses took their place on great, gold thrones, and their guests lined up to present their gifts. When the last gift was pressed into their hands, the wide, wooden doors to the hall rang like a giant, silver bell.  The celebration stopped and everyone turned to stare.  Then doors melted into liquid glass and a exquisite queen stepped through the ripples. A mist swirled about her, and her garments were as dark blue as the lake depths.

The courtiers fell to their knees, for she was the Queen of the Faeries, Empress of the Waterways who reigned far beneath the waters in a palace of pearl.

The Queen approached the princesses, her arms outstretched with a gift in each hand. When she spoke, her voice was a deep whisper, similar to a mother lulling her child to sleep.

“You, my dear young princesses, are beloved by my people. Today I come with a gift for each of you.”

The younger princess immediately descended from her throne to greet her, but the selfish sister just nodded her head.

The queen gave each a tall chalice, wrought in silver and pearl, the most delicate and beautiful they had ever seen.  The silver shimmered like a lake surface on a summer day, and when they turned their eyes away, it looked like a forest pool in morning mist. “The bearers of these chalices,” said the queen, “will never lose their beauty, nor their capacity to bestow beauty on others.”

The younger princess bowed deeply and said, “You honor us with your kindness, your majesty.”

The Queen responded, “Your gratitude will be complete when you seek out the third cup, hidden in the forest. Follow the setting moon.” Then a mist fragranced with fairy spices engulfed her, and she vanished.

The good princess desired to thank her instantly, and gathering some preparations, set out toward the forest. It was known to be treacherous to travelers.  The elder princess decided to stay, content to gather her gifts around herself.

For five days and a night the younger princess walked through the forest, the thorns scratching her face and clothes. She was determined to respond with the greatest gratitude possible. She ate what she could find, often nuts, herbs and wild fruit, and shivered under her blankets. Three times she stopped to turn back, and three times she made herself go on through the gloomy trees, ever searching for the setting moon to guide her.

Her shoes finally broke as she crossed clusters of rock, and so she resorted to walking in her bare feet across the pebbles until she reached a black cascade, falling into a dark pool. As another night fell, the moon rose over the waters and they became clear as glass. In the depths amidst scattered diamonds, lay the final chalice.

She stepped into the water and drew it out, turning it in the light to see the shimmering silver. She wrapped it carefully in her cloak, slung it about her shoulders,  and started the long walk home.

By the time she reached the banks of the lake near her castle, her courtiers had gathered to congratulate her. The elder princess was angry that she had returned, but went out to stand next to her, as though they had undertaken the trip together.

The young princess walked to the waters edge. She dipped the cup into the water, and spilled it back into the lake.

Instantly a mist formed, and the beautiful queen stepped out of the waters.

“Gratitude is rare in this world of men,” she said, taking the chalice, “You have touched my heart. But… only one pair of hands has touched this chalice.”

The selfish princess tried to escape through the crowd, but the queen’s enchantments turned her feet to stone.

“Where is your gratitude for my gift?” she demanded. The princess could think of nothing to say, for she had done nothing. She could not even apologize, for she was too proud.

In punishment, the queen turned her into a willow tree for a thousand years, to weep at the lake edge, and stand in testament to the world for her indolence. The elder princess was horrified to see her feet becoming roots, her arms extending into branches, and her hair filling out into long leaves that swept the grey ground.

“Because you could not even thank me for my gifts, you shall have none, and I bestow all three on your sister”, said the queen. “This third chalice brings the wellspring of plenty, so that you will never lack the grace to give.”

The Queen then touched her finger to the lake surface. The waters rippled and broke apart, mist rising to mingle with the bright stars. Deep below, they all could see revealed a castle of a million pearls.

“You will always enjoy the protection of my people,” the queen said to the princess. “Everything I have is yours, from the first drop in my realm to the last diamond.”

The young princess returned to her palace, and drank from her chalice daily, for its enchantment made her lovelier each time.  The third chalice always hung at her belt, and she used it to give drink to the poor who gathered at her gates. They all wondered at how it never needed to be filled, and yet sweet water filled it to overflowing.

And she lived happily ever after.

Parents note: This story concerns the virtue of gratitude, how its benefits can often create ripples beyond our control, sometimes to come back and reward us.