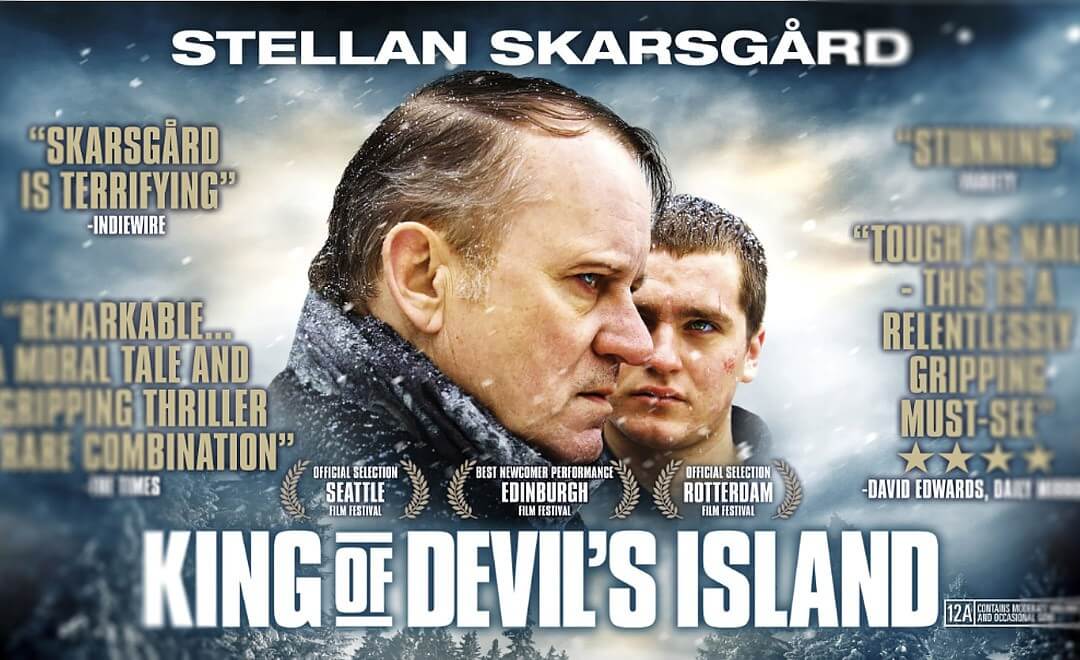 There are some stories that peel back the layers of a boy’s soul, to reveal the pumping, young heart of a man. Their hearts hunger for justice, affirmation and identity.

In the harsh and stirring film, King of Devil’s Island, is based on a true story from 1915. Young Erling is sent to a boys’ reformatory on a tiny island off the coast of Norway. Much of the story is set in the winter, a reflection of the cold, hard and unrelenting attitude many of the boys have to their punishment and jailors.

It’s a cross between the Newsies and Lord of the Flies, with the grit cranked up.

Heart of a Rebel

Erling makes his mark as the new rebel on the block, puts the local bully in his place and immediately sets about planning his escape. He is the first to ever escape Devil’s Island, a trophy that doesn’t sit well with the Governor. Beneath his veneer of piety and reform, the Governor is siphoning off funds to line his pocket, leaving the boys to freeze over hard labor and meager meals.

Erling befriends his unit captain, Olav, a model of reform. Olav has spent six, painful years learning the rules, unwilling to take any risks, and his sentence is almost over. But when the two discover that one of the Housefathers has sexually abused a boy, Olav makes the hardest decision imaginable; he forfeits his freedom for justice’ sake and brings the issue to the Governor’s notice.

The Governor tries to hide the scandal by crushing the informants, and the raped boy commits suicide.

The boys erupt into an all-out uprising, ransacking the prison and driving away the staff.

Finally, the Norwegian army is called in to put down the rebellion, and Erling and Olav flee across the frozen fjord to freedom on the mainland.

The Spirit of Spartacus

Spartacus was a Thracian slave during the Third Servile War, 73-71 BC. He broke free with a gang of gladiators and mustered an army. Although ultimately crushed by Roman legions, the spirit of his rebellion against a cruel, undignified and unjust slavery resonated with hundreds of thousands of other slaves.

Certain moments in the King of Devil’s Island made two things clear.

One, the desires of a man’s heart are forged in the heart of a boy. Those boys rising up against their severe and duplicitous jailors were not children. They were men. ‘Little Men’, angry and bitter for a world of justice, mercy and manhood.

Two, the tragic fallout when fathers provoke their children to anger (Eph 4:6), and how years of “bringing them up in the discipline and instruction of the Lord” mean nothing when it isn’t first lived.

In his book, Wild at Heart, John Eldredge speaks to the imparting of manhood from father to son. It can only happen that way; boys don’t learn manhood from their mothers. With absent or abusive fathers, boys never learn to be true men, or find new role models. And either way, they are viciously scarred.

The Rite of Passage, once a cosmic, crucial moment of identity and definition, has largely been lost in Western culture. Without the defining affirmation of his manhood, his wildness, his combative heart, his strength, his need to belong, his yearning to join a cause, fight with a team, and friends with which to associate, a boy’s heart retreats into itself, giving us the generation of bitter, confused and immature men surrounding us today.

C.S. Lewis said in ‘The Problem of Pain’ that if God is a distant dictator, then man will always be impelled to rebel. It takes a father to invite sonship and reconcile harmony. Hence Jesus Christ’s incessant reminder that God is not just Lord, Master and Creator, but preeminently Father; benevolent, just and affirming with the words, ‘This is My Son, with Whom I am well pleased’.

Because that’s who we are. We are men. That’s who we were made to be; made to be the front line, the first response, the builder, the provider, the survivor, the caretaker, the guard, warrior, king and servant.

The prison in King of Devil’s Island is made up of outcasts, rebels and juvenile delinquents. But really they are abandoned children. We see their rite of passage, the moment when they will no longer keep swallowing a lie. The film leaves the sad realization that at the end, those boys making men’s decisions had set their hearts, but badly, like broken bones.

This film sums up the essence of Eldredges’ book; boys are wild at heart. The last thing they need is to be pansified, medicated into apathy, psychoanalized out of their needs and possibly worst of all, dismissed as irrelevant. Boys are Elijah standing at Elias’ elbow, begging for a double portion of his spirit.

More than anything, this film is a conviction, and a generation of fathers are in the dock. The boys all ask the same question: “Where were you when I needed you? Do I matter? Am I a man?”

'King of Devil's Island' (2010) sums up the essence of John Eldredges' book; boys are Wild at Heart. @johneldredge http://t.co/DlubB9KiO7